GC is an invaluable tool used for separation of compounds in a mixture followed by their qualitative identification and quantification. It finds major applications in analysis of  petroleum &petrochemicals, pharmaceuticals, foods and beverages, flavours &fragrances, forensic investigations  and environmental monitoring.

GC chromatogram is also referred to as Gas Liquid Chromatograph or simply as Gas Chromatograph. It comprises of individual components illustrated above. In essence the component parts are

The role of each of these component parts is described in detail in our free e- course on GC and will be elaborated further in the Certificate Programme which is due for launch later this year.

Mobile phase – serves as carrier for the injected sample to the column and leads separated components to the detector. In Gas Chromatography mobile phase comprises of separate gas streams-inert gas such as nitrogen or helium,oxidant which is generally air and fuel gas which is usually hydrogen.The three are pre-mixed in the required proportion before being led to the system.

Column –Columns in GC are generally longer and narrower than HPLC columns.These are filled with the stationary phase or the inside wall is coated.Depending on selective adsorption of separated components selective retention takes place.

Detector – Most commonly used detector is the flame Ionisation detector(FID), in which the separated components get ignited in the flame and detector response is dependent on current generated due to compound ionization..Other common detectors are TCD,ECD and FPD.

Rt is retention time of peak. It is qualitative indicator of presence of a compound in the mixture.

\(t_0\) is time the mobile phase takes to pass through the column and reach the detector when no sample is injected.

This post is a basic introduction to the GC chromatogram and also an elementary depiction of chromatographic output. Further details can be accessed by registering for the free E-learning GCcourse Certificate programme. 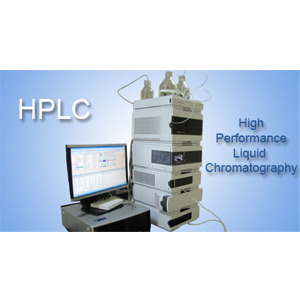 High Performance Liquid Chromatography (HPLC) is a popular and versatile technique which provides affordable solutions on separation, identification and quantification of constituents of complex organic…