Dioxins and Furans are generated during various industrial processes such as manufacture of herbicides, pulp and paper industry and combustion processes such as coal fired power generation, cement kiln, copper smelter or municipal waste incineration.

Dioxin and furans are dangerous by- products of natural and man- made processes. Dioxins are not soluble in water but highly soluble in fat. They tend to absorb in human and animal fatty tissue. In addition they are not biodegradable so they persist and bio – accumulate in the food chain.

Human exposure to dioxins is mainly through foods such as meat, fish , shellfish and dairy products.

Dioxin is a heteroyclic ring compound having chemical formula [Latex]C_4H_4O_2[/Latex] and exists in o – and p- isomeric forms. 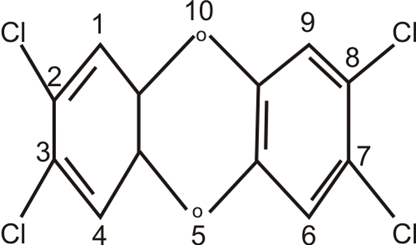 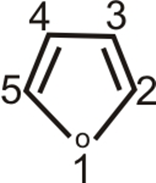 Analytical requirements for dioxins pose unique demands to analysts as compared to other routinely monitored pollutants. In comparison to most pollutants which are monitored in parts per million (ppm) or parts per billion (ppb) levels dioxins due to their highly toxic nature require monitoring in parts per trillion (ppt) or even parts per quadrillion (ppq) levels. US Environmental Protection agency (EPA) method 1613 A is a high resolution method reporting results in the ppt or ppq levels for a variety of matrices such as soils, tissue, effluent, solids, etc.
GC-MS-MS technique can provide reliable analysis of PCDD /Fs in food stuffs.

Triple Quadrupole Mass Spectrometry allows for drastic reduction or elimination of matrix interferences that limit the accuracy and detection limits of SIM method. This process, referred to as multiple reaction monitoring ( MRM) has two fundamental advantages over SIM. First detection is based on secondary ‘product ion’ produced by the collisional dissociation of an analyte ‘precursor ion’. The analyte precursor ion (isolated in Q1 by a SIM mechanism) has the same selectivity as SIM but there is a higher probability that at best one of the resultant product ions will be unique to the precursor and not the interference. The increased sensitivity of MRM is often apparent by the reduction of the baseline as compared to SIM. Secondly during the mass filtering process in Q1, all lower m/z ions from the sample are eliminated. The unique product ions from the collisional dissociation are measured in this zero noise region of the spectrum. The combination of unique product ion (more selectively) and the elimination of background noise results in consistantly low limits of detection even for complex matrices.