On observing a linear calibration plot you will believe that it is possible to arrive at any concentration ranging from zero to a concentration within the linear range of the plot. However, have you ever wondered what is the lowest concentration you can determine or better still quantify with a certain degree of certainty. A number of confusing terms come up in your mind such as sensitivity, limit of detection, limit of quantification or even limit of blank. It would certainly be helpful if you could differentiate between such terms which appear to convey the same meaning.

It should be clear that all analytical techniques have their limitations on estimating analyte concentration at or close to zero point on the calibration plot. Theoretically the analyte must be present in sufficient quantity that can produce a signal that can be distinguished from noise.

Limit of detection (LOD) is defined as the lowest quantity of the analyte substance that produces a signal at least three times the average noise level of the detector. LOD is estimated from replicates of large number of blanks(ranging from 10-20), and determining the standard deviation of the noise signal

An alternate approach to avoid ambiguity of measuring of analyte in a blank is to analyse repeatedly small but known concentration of samples along with blanks. The objective is to arrive conclusively at what analyte concentration is necessary to distinguish its presence from its absence. As per this approach

A large number of sample replicate measurements are required to be made to arrive at the robustness and statistical confidence of the estimate. An instrument manufacturer needs to perform even more stringent tests using more than one analyzer and under varying range of analysis conditions to come out with certified minimum instrument specifications that will hold out in laboratories under usual operating conditions. 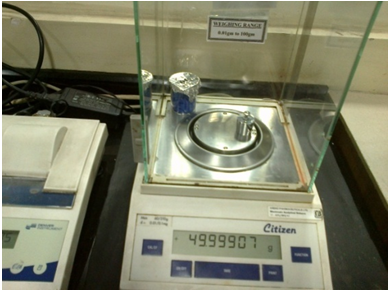 Weighing is a basic operation in any analytical laboratory. It is possible to run a laboratory without modern analytical instruments but it is not possible…