As you would be aware a very small fraction (1 in \(10^7\) ) of scattered radiation is available for Raman activity. This was the main impediment in the growth of the technique and it was for this reason that Raman spectroscopy remained in its nascent stage till around 1960s when powerful laser sources became available. The applications were limited to concentration levels around
0.1 M due to non-availability of intense lines sources

The photon energy of the exciting laser beam is matched with the electronic transitions of a chromophore group within the molecule under study. Under such conditions resonance effect takes place which increase the intensity of Raman line to the order of 102 to 106. Using this technique a high increase in sensitivity of the order of 10-8M is achieved. Resonance Raman spectroscopy has been successfully used for study of molecules that absorbs strongly in the visible region.

it was observed that Raman signal from some molecules adsorbed on electrochemically roughened surfaces yielded intensities of the order of 5 to 6 times more than the molecules in bulk volume. The enhancement was also seen for absorption on silver and gold colloids with average sizes below 20 nm. In combination with Raman resonance effect the enhancement of signal intensities to the tune of 1014 were achieved. The technique extended applications to trace analysis, interaction of molecules with the adsorption surfaces as well as general applications in chemistry, biochemistry and physics

In this approach instead of a single laser source two very strong lasers irradiate the sample. The frequency of the first laser is constant whereas the frequency of the second laser is tuned so that the frequency difference between the two exactly equals the anti-Stokes frequency of some resonance signal of interest. The advantage of SARS is that Raman transitions in the presence of an irregular background can be studied.

Application of the signal enhancing techniques either singly or in combination contribute to a great extent to the technique gaining its present day popularity. A subsequent article will cover the scope of applications of Raman spectroscopy. 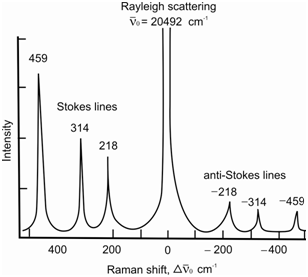