Spectroscopic Absorbance measurements are based on the famous Beer Lambert law which states that at selected wavelength the absorbance by absorbing species is in direct proportion to its concentration and path length of the sample cell.

The deviations from the Beer Lambert law are classified under three main categories:

Beer Lambert law applies to dilute solutions typically below 10mM concentrations. At higher concentrations physical interactions such as solute– solvent, solute – solute and hydrogen bonding can come into play and influence absorption measurements. As such the concentration versus absorbance plot begins to show deviations from linear behaviour.

The absorption behaviour of solutes changes due to chemical interactions such as associations and dissociations and from increase in concentration or changes in pH of the solvent. Due to electronic transitions with changing pH the colour of absorbing species can undergo distinct changes. Substitution of chromophore groups in a molecule can result in shifts of wavelengths of maximum absorption.

Stray radiation is radiation reaching the detector whose wavelength is outside the range selected by the monochromator. It results from reflection and scattering of light by surfaces of optical components of the system.Ideally monochromator should produce a single wavelength from a polychromatic beam but this seldom happens and instead a band of wavelengths gets isolated. Absorption by analyte can also take place at stray radiation wavelengths and result in deviations from Beer Lambert law. 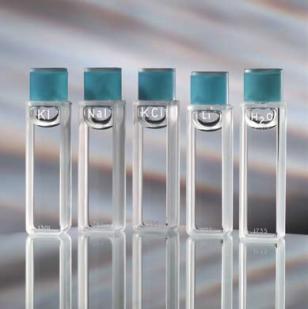 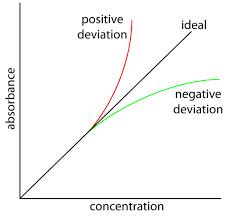