A typical chromatogram comprises of several peaks varying in size. The height of each peak is in proportion to the amount of the particular component present in the sample mixture injected into the chromatograph.

The chromatogram shown above is an ideal one showing symmetrical shaped peaks rising above a stable horizontal baseline. It can be seen that the peaks are well separated from one another and there are no overlap or shoulder bands. In such situations it is immaterial whether you use peak height or peak area in quantitative calculations.

Real-life sample chromatograms may not be that simple and will more than often show deviations resulting in non-Gaussian peaks due to several factors some of which are listed below:

In such cases complications arise due to unsymmetrical peak responses and unstable baselines which are not uniformly flat. Peak height based calculations will lead to errors in quantitative estimations. Closely appearing peaks cannot be integrated in a reproducible manner because neighbouring peaks or overlaps influence peak height and area integration.The same is true for peaks arising from sloping or noisy baselines.

Peak integration is a mathematical operation performed by the chromatographic software to measure the area under a peak. The area measurement is based on integration which hypothetically divides the region below the peak into several rectangles which are summed up to give the total area under the peak.

Asymmetrical peaks often result due to peak tailing. It is difficult to reproducibly mark the endpoint of such peaks. This leads to errors in reporting of areas resulting in lowering of precision and accuracy of quantitative measurements.

Peak areas are used for most quantitative chromatographic estimations. Peak heights can vary due to distortion of the shapes such as the broadening or fronting and tailing. However, in such situations areas are not affected and show high reproducibility.

On the other hand for very small peaks resulting from trace amounts of impurities peak height calculations may be a better option as errors in small variations in making start and end point of peaks become negligible.

The answer to the choice is based on your judgement of the quality of the chromatogram. However, in a majority of situations it would be advisable to make use of peak area measurements to get the highest levels of accuracy and precision. 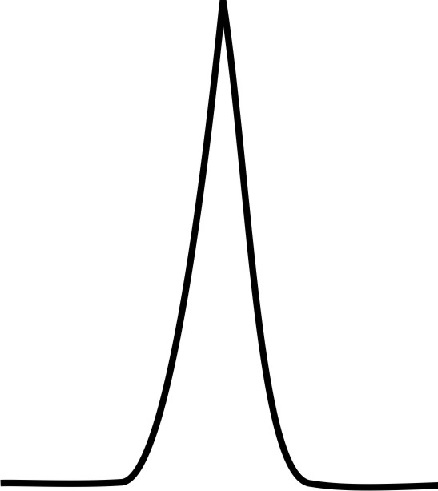