What Is Gas Chromatography?

Gas Chromatography or Gas Liquid Chromatography is a technique applied for separation, identification and quantification of components of a mixture of organic compounds by selective partitioning between the stationary phase and mobile phase inside a column followed by sequential elution of separated components. The technique is suitable for separation of compounds having following characteristics :

The main purpose of the gas chromatography technique is to separate the compounds that possess:

How does gas chromatography work?

For having a hold on how does chromatography works, we need to be aware of the individual components of a GC chromatogram or GC Chromatograph.

The main components are:

The injector is a heated block where the sample is injected.  Through the carrier gas stream, the sample is spontaneously vaporized and led to the column.

This is filled with the stationary phase or its walls are covered with a liquid adsorbent. This is done for selective absorbance and retention of the sample components.

Component of a Column – Oven

The column is enclosed by a column oven which is responsible for maintaining a constant temperature during isothermal operation. This temperature when temperature programming is needed can be increased in a controlled way for acquiring effective separation of mixture components possessing different volatilities.

This is employed for the identification and quantification of components.
Here, the regions of individual peaks created relate to their concentrations and their retention times are representative of their identity.

It is a set of dedicated software that provides control over many important operational parameters like injection sequence, wash cycles, over-temperature control, the flow rate of gases, detector wavelength, etc. Simultaneously, the data station calculates and displays the parameters.

This is calculated from the time the sample was injected into the column (t0) till it reaches the detector. Every analyte peak has a retention time that is measured from the apex of the peak, just like tR.

This shows the measured response of the analyte peak within the detector.

The baseline here represents the signal received from the detector where no analyte is eluting from the column or is beneath the detection limit. It is considered as an indication of a problem or indication to check the maintenance, in situations where the baseline is found higher than usual.

Measurements such as width at the baseline, width at half height, area, and total height can be withdrawn from the peak.

The accuracy of measurements is influenced by the total number of data points present across a peak. 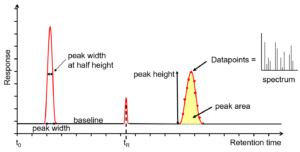 Both the methods use either liquid or solid as a stationary phase while using gas as the mobile phase. In Gas-solid chromatography, the retention of analytes is due to physical adsorption. On the other hand, gas-liquid chromatography separates the ions or molecules that are dissolved in a solvent.

The underlying principle is – as the sample solution makes contact with the second solid or liquid phase, the solutes will start interacting with the other phases. Due to different adsorption rates, ion-exchanges, partitioning or sizes, the interaction will vary, and that’s what will enable the separation of the mixed components from each other. These differences will make the sample mixture pass at different rates through the column, and the compounds can be separated.

A Gas Chromatograph like any other analytical instrument has evolved from one with several knobs and dials to one having a simple microprocessor-based keypad to control the operational parameters.

The simplification has resulted in ease of operation and time-saving. An understanding of the main component parts will help in maximum utilization of system capabilities.

Gas Chromatography has a high peak capacity in comparison to other separation techniques. Although it has the ability to separate a huge number of compounds, there are a few applications that require thousands of peaks to be separated and we don’t have enough theoretical plates to separate them through chromatography.

A common example of this is the analysis of diesel that involves identifying trace analytes in complex matrices, such as food samples or environmental samples.

The analysis can be carried out without full chromatographic resolution through spectral resolution, where MS is hyphenated with GC. However, this technique can be successful under the condition that the coeluting peaks have different spectra.

Heart-cutting works well where the majority of the peaks are separated through a column and then a few groups of coeluting peaks are cut and transferred to a new column consisting of different stationary phase and selectivity. If the samples are complex with frequent co-elutions, two-dimensional chromatography is used.

Gas chromatography is broadly utilized across many industries for routine analysis, research or analysing hundreds and thousands of compounds in different samples and components from solids to gases. This technique is quite robust and can be easily mixed or coupled with other distinctive techniques, such as mass spectrometry.

However, gas chromatography can analyse volatile compounds from helium/hydrogen only when their molecular weights are around 1250 u. In the case of compounds that are thermally labile, exposure to high temperatures in GC can degrade them.

Cold injection techniques and low temperatures can be used to minimize that. To prevent polar analytes from getting lost or stuck in GC, the system must be well-maintained and the analytes must be derivatized.

One of the major problems with gas chromatography is leakage. As the mobile phase is a gas that flows through the system, leakage may occur. Therefore, it is crucial to ensure that the parts and consumables are correctly installed and the system is regularly checked for leakage.

Another problem is the activity for more polar analytes, especially the ones at trace levels. Issues like irreversible adsorption or reactant breakdown can also occur due to dirt build-up in the system and silanol groups on the glass liners and columns.

Most problems are seen on the inlet area where the sample is injected, transferred and vaporized into the GC column. Hence, ensuring proper maintenance of the inlet and use of correct consumable is essential.

The glossary will help you familiarize with the terminology in case you are not already familiar with  the gas chromatography working technique.

Refresh your basic skills by registering for the free e-course on GC which will provide you an introduction to the technique and even prepare you for an interview if you are applying for a job in a laboratory equipped with a GC system.

Want to read all the AAS free course modules right now? Here are all links to all the modules for you!

See the list of published articles related to GC specially prepared for upgradation of your laboratory skills and bring about exposure to new concepts and developments. You willl find that the list is ever growing with inclusion of new published articles as and when they are published.